The most important component in car audio is the fuse. The function of a fuse is to protect the circuit (wiring) that it is attached to. The most important fuse in car audio is the fuse that protects the main power wire running to your amplifiers. If this wire is not fused, and the main power shorts to ground, you can say goodbye to your vehicle. The intense current flowing through the power wire will heat up the wire until it burns up, taking your vehicle with it. Don't forget to fuse! The photos in the table show examples of a main power wire fuse. Other smaller fuses will also be used in such places as the head unit and any signal processors you may have. The top picture shows the kind of fuse you will typically find in your vehicle's fuse box. It's called an ATO fuse or a knife fuse. The middle picture shows the kind that is commonly used in in-line fuse holders such as the main power wire. The bottom fuse shows the type of fuse (ANL) you may see in a very large power wire fuse holder. There are also MAXI fuses and AFS fuses that also carry large currents but the ANL handles the largest current values. Never, ever replace a blown fuse with a fuse of higher value. That value was chosen for safety and using a larger fuse is asking for trouble. If you keep blowing fuses then that's an indication of a problem. Have it checked out. 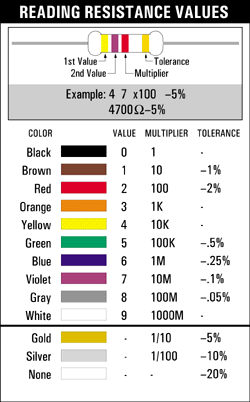 A resistor is a device that does what the name implies. It adds electrical resistance to a circuit. Typically resistors found in circuits will be simple carbon resistors though more expensive sand cast and wire wound resistors are sometimes found in passive crossovers. A typical carbon resistor looks like a small cylinder with a bare wire protruding from either end. Resistors come in many values and knowing how to read them can be useful for some. Most consumers won't need to know the method but if you're interested here's how. The resistance is marked on the resistor body using a color code with 3-4 bands of color. See the chart. The first and second bands denote the first two digits of the resistance value and the third band indicates the multiplier that is applied to that value. The fourth band is the tolerance of the resistor or how accurate (or inaccurate) the actual value could be from the stated value. In our chart example the band colors are yellow, purple, red and gold. The yellow band gives us 4, the purple band gives us 7, (together giving us 47) and the red band tells us to multiple 47 by 100. This gives us a resistor value of 4700 ohms. The gold band tells us the tolerance of the resistor is 5% so our resistor could actually be anywhere from 4700*.95 = 4465 ohms or 4700*1.05 = 4935 ohms.

There are two main types of capacitors, polar and non-polar. They look similar but have different purposes. Polar capacitors would be used in noise reduction circuits and other non-audio applications. Non-polar capacitors are used in passive crossover circuits. It's very important to have the right capacitor for the job. The purpose of a capacitor is to store an electrical charge. The value of capacitance is measured in Farads. The higher the value the more charge it can store. Typically you will see capacitors measure in microfarads (1,000,000 microfarads = 1 Farad). A capacitor, like a resistor, is cylindrical with a wire lead protruding from either end. See the image. There are other types of capacitors but these are the ones we will see in car audio. The value of a capacitor will be marked on its side along with its tolerance value. NOTE: These capacitors are different than the power capacitors you may also use in a car audio system.

A diode can be thought of as a one way valve for current flow. A diode only allows current to pass in one direction. They are very useful in isolating current flows from each other and are often used in automotive security systems (car alarms). Here is a picture of a common diode. A diode has two different terminals, the cathode and the anode. The cathode is the side with the stripe. Current flows through the diode from anode to cathode. You would connect your positive source voltage to the anode and your receiving equipment on the cathode side. Current would then flow to the equipment but would not be allowed to flow back to the power source.

An LED is a special diode and is an acronym for light emitting diode. You're probably familiar with these as they are commonly used as turn on indicators for most electronic equipment. They come in various colors but the most common is red followed by green, yellow, and blue. Here is a picture of the common red LED. You'll notice that one of the leads is longer than the other. This is the anode. Keep in mind that LEDs operate on 1.8 volts so hooking them up to a twelve volt source will destroy them. You can operate them off of a twelve volt source by using a common 1k ohm resistor in series with the anode. This drops the voltage enough to avoid damaging the LED. Any value between 600 and 1,200 ohms should work though. The lower value will make the LED brighter but may also shorten its usable life.

A relay is an electromechanical switch (a mechanical switch controlled by electricity) that is most widely used for car security systems. It is also commonly used as a way of protecting your head unit from damage if you have more than two devices (amplifiers, signal processors, etc.) being switched on by your head unit's remote turn-on lead. Basically a relay allows a small current to control a much larger current. The common Bosch type SPDT (Single Pole Double Throw) relay is show in the photo at right.

A relay consists of four main parts. A coil, denoted by terminals 85 and 86, a common terminal, denoted by terminal 30, a normally closed terminal, labeled terminal 87a and a normally open terminal labeled terminal 87. Depending on whether your controlling voltage is negative or positive, terminal 85 or 86 will be either grounded or connected to +12 volts. If you have a positive controlling voltage, such as a head unit remote turn-on lead, you will need to ground either terminal 85 or 86. It doesn't matter which one you choose, but the other terminal will be connected to the remote turn-on lead of your head unit. The common lead, terminal 30, would be connected to +12 volts because that is what we want to apply to terminal 87 when the relay coil is energized. Terminal 87 would be connected to the remote turn-on terminals of our various electronic components (amplifiers, crossovers, equalizers, etc.). Terminal 87a would not be connected at all and should be insulated if it is exposed.

Here is an illustration of how we would wire up our example. When our remote turn-on lead applies +12 volts to the relay, the coil becomes energized and connects terminal 30 to terminal 87. We could have also connected terminal 30 to the electronic components and terminal 87 to +12 volts. Either way would give us the results we're looking for.