Subwoofers are larger drivers that are used to reproduce the frequencies around and below 100Hz. Smaller loudspeakers are unable to effectively produce frequencies in this range due to size limitations of the driver. Subwoofers are generally considered speakers of 8" or larger and will require more amplifier power than coaxial or component loudspeakers due to their larger size. Subwoofers will also require an enclosure to produce these lower frequencies effectively. Sometimes the enclosure can be as simple as the trunk of a sedan or as complex as a series-tuned dual-reflex band pass enclosure. The cone size and enclosure required will be two very important factors when deciding on a subwoofer for your system. You can even decide to purchase a square, triangular or hexagon shaped cone subwoofer instead of the traditional round cone.

So how loud will your subwoofer play? There are several factors involved but there is one that can be calculated. Up to the displacement limited power value the equation for volume is:

There are several manufacturers that offer non-typical subwoofer applications. Examples are the tube type subwoofer and the vehicle specific subwoofer system. Tube subwoofers are cylinders (tubes) with one end containing the subwoofer and the other end sealed (or ported in the case of Bazooka brand tubes. These are a fairly common way of adding a subwoofer to a limited space application or a leased vehicle and come in self-amplified varieties as well. Vehicle specific subwoofer systems are usually built from wood and fiberglass and are designed to fit snugly into a factory void or pocket. Because they are specific to one vehicle they are more expensive then either a standard box or tube configuration. However they can’t be beat for fit and use of space. 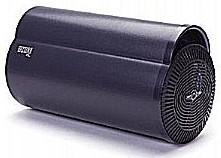 One final note when purchasing a subwoofer. Determine how much space you are willing to give up and then decide what subwoofer you want. You don’t want to decide you want two 15” woofers and then realize they won’t fit in your Geo Metro after you're out of the store. Be realistic about your goals for the system and the space you are willing to sacrifice to achieve those goals. If you want strong bass but have limited space, add more power to your subwoofer system. This is all part of system planning.

Aspects and features that need to be considered when purchasing subwoofers are:

Enclosure Type: This is the type of box or enclosure your subwoofer will be mounted in. The main types are infinite baffle, sealed, vented (ported), and bandpass.

Excursion: The amount of travel the speaker has in its cone assembly. The larger the excursion the more air (and sound) it can put out. This is measured as Xmax.

Power Handling: This is the amount of power a speaker can withstand before failing after a given amount of time. The most important number is the speakers continuous or RMS power handling. Peak power handling means virtually nothing.

Resonant Frequency (Fs): The frequency at which a speaker naturally vibrates. The lower the number the lower the frequency the speaker should be able to reproduce. This value will become less important once the speaker is in an enclosure since the total system resonance will need to be taken into account.

Sensitivity: This is a reference measure of how loud a speaker will be with a certain amount of power at a certain distance. The standard is one watt at one meter. By halving the distance an increase of six decibels will be realized and doubling the power will increase the output by three decibels. This is a trick used by some companies to make their speakers appear more efficient than they are. Most loudspeakers will be in the ninety decibel range. Keep in mind that a difference of three decibels is equivalent to a doubling of the amplifier power.

Xmax: The distance a speaker can move forward and backwards, usually measured in millimeters (mm). More is better. Like power output of an amplifier, make sure you are comparing apples to apples. Some manufacturers specify one-way travel while others specify two-way travel (twice the one way travel distance). You should be comparing one-way, linear excursion.

You should also check out Advanced Enclosure Design and Fabrication. It covers designing enclosures using free computer software, maximizing the output of a subwoofer system, building the box like a pro and testing the output using inexpensive equipment. Click here.