The function of equalizers, crossovers, and other signal processors is to electronically change the music signal in some way to make it more usable. These processors are sometimes built into other units such as amplifiers. However, they are at their absolute best when designed as an outboard unit. 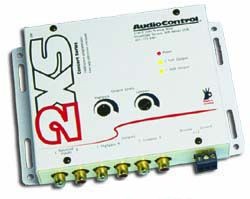 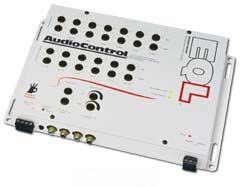 The equalizer is a sophisticated tone control for the system, adjusting many different low, mid and high frequencies. Equalizers come in many forms including dash and trunk mount units with either graphic, parametric, or quasi-parametric processing. The most common type of unit is the graphic, in-dash variety. Usually half the height (half-DIN) of a source unit, this type is the most easily adjustable and therefore the most often misused. An equalizer should really only be set once to overcome the acoustic problems of the car and then adjusted only periodically when tuning the system. This is why trunk mount units are used in car audio competition more often than the in-dash variety. When using an equalizer do not overdue the boost on a frequency. If possible try to cut a frequency rather than boosting another. Over-equalizing a system can cause damage to the components, especially the speakers.

Surround Sound and Other Processors

There are other signal processors that perform various tasks. Some extract information to be sent to a center channel speaker, some add various sound effects or echoes to the music while some can even change phasing and delay. One of the more popular signal processors is the bass restoration unit. The most well known unit is the AudioControl EPIC-160 and Epicenter. Many new units are becoming available that decode surround sound information on DVD and the new audio disc formats such as DVD-Audio and SuperCD. These units can be useful (and expensive) but they can also be frivolous (and expensive). There are very few low quality signal processors that perform these extra features. They are usually reserved for competition vehicles or for the owner that has/wants everything.

Features and terms relating to the various processors are as follows:

Bands: This is the number of frequencies an equalizer can adjust at one time.

Continuously Variable: This is a crossover's ability to be adjusted to a range of frequencies rather than a set of a few frequencies. Some units (notably AudioControl) have adjustable frequencies but they must be changed with an internal resistor pack. This is more accurate than the potentiometer and most variable controls but also a bigger hassle during installation and tuning

Curve (Equalizer): This is the way that the equalizer is set from frequency to frequency.

Decibel (dB): This is the measure of how loud a sound is based on a scale of zero decibels being the threshold of human hearing. Doubling the amplifier power gives an increase of three decibels while ten decibels is needed for a sound to be perceived as twice as loud.

Delay: The amount of time, usually in milliseconds (ms), that a signal processing unit adds to a channel of music. This is usually used to delay the rear channels with respect to the front channels to give a sense of greater space.

DSP: Standing for digital signal processing it is most commonly found in processing units to recreate or simulate a specific acoustic environment. Many older units used this technology to recreate venues like a concert hall or a disco club. Most newer units do not use DSP for this (the gimmick gets old quickly).

Graphic: This equalizer has only a set of fixed frequencies that can be adjusted. Most often found on in-dash units.

Phasing: Refers to how far a signal varies, in degrees, from another signal. For example, if two subwoofers are wired with their terminals (+ and -) reversed with respect to one another they are one hundred and eighty degrees out of phase. This means that while one speaker is moving out the other will be moving in. Phase can also be changed by changing the distance two speakers are from the listener(s).

Presets: Some equalizers can be programmed to have more than one equalizer curve to adapt to different music and driving conditions.

Quasi-Parametric: This is a parametric equalizer that does not allow the Q to be adjusted but the frequencies can be.

Real Time Analyzer (RTA): Sometimes called a "stick", this is a sophisticated tool for measuring the frequency response of a system over the entire audible spectrum. A type of sound which is equal at all frequencies, called "pink noise", is usually used in conjunction with these meters.

Slope: This is the rate at which a crossover attenuates a signal in decibels per octave. For example, a low pass, 12 dB per octave slope, at a frequency of 100 Hz, will be twelve dB less at 200 Hz, 24 dB less at 400 Hz and so on. Most active crossovers have an adequate slope of 12 dB per octave while higher numbers such as 24 dB per octave will give a better cutoff, especially useful for subwoofers.

Spectrum Analyzer: A display of bouncing lights on the face of an in-dash equalizer that correspond to the equalizer frequencies that can be adjusted. While eye catching on a sales floor these can become annoying (and dangerous) when driving.