A car audio power capacitor is a secondary, passive (non-powered) storage device for electrical power. Sometimes simply called a cap, power cap or Stiffening Cap™. They typically come in cylindrical shapes that are three inches in diameter and about a foot long though rectangular shapes are also available for different technologies. There will be a positive and negative terminal and possibly a third remote turn on terminal that turns an LCD display on or off. Regardless of the shape or extras they come with they are designed for one thing, to store electrical power.

Why Does a Car Audio Power Capacitor Work?

A car audio power cap works by storing large amounts of electrical power which it can then deliver to power hungry components when called upon to do so. They have an advantage over typical lead acid storage batteries because they have very low internal resistance. This allows them to deliver large amounts of power (current) very quickly. Much faster than a car's charging system can deliver that same amount of current.

Car audio power amplifiers can have very large current demands. This is dependent on the music being played through the amplifier. Typically these currents are only needed in short bursts during transient peaks (bass drum note, etc.). If the amplifier tries to pull this current from the electrical system directly it may cause a drop in voltage called a sag. This sag is equivalent to a voltage drop in the system and the size of the drop depends on the resistance of the wire from the source (battery) to the amplifier.

As an example, let's say you have twenty feet of 8 gauge wire and your amplifier suddenly needs 100 amps for a bass hit. Using Ohm's Law where voltage, or in this case voltage drop, is equal to the current (100 amps) times the resistance. Using a power wire resistance table we can see that 8 gauge wire has a resistance of 0.000739 ohms per foot. Multiple that by the twenty foot length of wire we have to get a total resistance of .01478 ohms. That doesn't seem like much but relative to the voltage of a vehicle's electrical system it is. Here's the math using Ohm's Law:

E = I x R or voltage = current multiplied by resistance

So 100 amps running through a twenty foot long run of 8 gauge wire causes the voltage at the amplifier to drop about 1.5 volts. And if your vehicle's system is charging at 14 volts (13.5-14.5 is the average range) the voltage at your amplifier will be 12.5 volts. This also shows why you need to know the current draw and wire length in your system. If your amplifier(s) are capable of large current draws on a continuous basis you need to have large power wire to keep this voltage drop minimized.

So what does that have to do with a car audio power capacitor? Two things. First, a power capacitor is placed much closer to the amplifiers than the battery is so that voltage drop is going to be much less all other things being equal. But second, your charging system probably isn't designed to provide current draws that large at any time. So your amplifiers are going to have to get the power from the vehicle's battery as well as the alternator. And the battery has its own internal resistance which, as stated before, is much higher than that of a car audio power capacitor. Because of this extra internal resistance it is not an effective means of delivering large amounts of instantaneous current. The capacitor acts like a small tank with a large hose while a battery acts like a large tank with a small hose. So with a capacitor installed you can deliver a large current burst during a music transient and then the capacitor can recharge during the non-peak portions of the music.

See the diagram below which illustrates the capacitor as a water tank. The water represents the electrical energy that a capacitor stores. The tank has a slow moving input line which comes from the battery. The tank also has a large output line which goes to the amplifiers. This large output line let's the tank drain quickly. But if the amplifiers try to pull too much out the tank will empty and you will have to wait until the slow input line from the battery refills it. To avoid this you need to make sure your tank is big enough for your amplifiers. This capacity or "tank size" is measured in Farads. 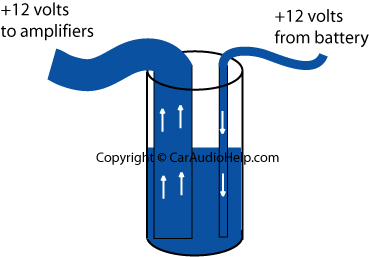 Will a Power Capacitor Help You?

I don't know, it depends. How's that for an answer? The degree of help a power capacitor will give you depends on your specific vehicle, car audio amplifier(s) current draw, music type and listening habits.

How Do You Know if You Need a Power Capacitor?

The first way most people know if their system is in trouble is headlights dimming. To most car audio enthusiasts with a passing knowledge of electrical systems this means a capacitor is needed. Headlights dimming? Get a cap. And that's a pretty good guess but not always true and certainly not a guaranteed cure. A power capacitor can only do so much. If your electrical system only has a scrape it's a good band-aid but if it's really bleeding you need stitches. And stitches come in the form of an upgraded alternator and battery. If the headlight dimming only occurs at idle then it probably isn't much to worry about and a power capacitor may help. An idling vehicle puts out much less current from the alternator while the current draw from the audio system remains the same.

What Size Car Audio Power Capacitor Do You Need?

Since the beginning of car audio power capacitor time (late 1980's) the accepted rule has been one Farad of capacitance per 1,000 watts of power with a minimum of one Farad (that last part is often forgotten). This value was determined experimentally by Richard Clark (of Autosound 2000 and Buick Grand National fame). More isn't necessarily better but it doesn't hurt either.

So Do You Need One or Not?

If your system doesn't exhibit any problems such as dimming headlights then it probably isn't worth the added expense. I've done vehicles that benefited tremendously from caps and others that appeared to have not benefit at all. As always the only way to find out is to try it. Though every car audio shop is different it's unlikely that they will let you test drive a power capacitor. An easier way may be to borrow one from a friend that may already have one installed. Just remember to observe the same safety rules for uninstalling and installing a capacitor as you would for a battery (disconnect the negative terminal of the battery, remove the main power wire fuse, etc.). If installing the power capacitor doesn't help with dimming headlights then you either have a faulty charging system or an inadequate charging system. A qualified mechanic can tell you if the electrical system is not charging correctly. Be sure they check the grounds for the battery, engine block and the power wire from the alternator to the battery (the "Big Three").

In some cases you can determine for yourself if the factory charging system is adequate even under ideal conditions. Find the output rating (amps) of your alternator and figure about 30% of that may be available for your audio system. Remember that an alternator's output is not constant and the rated output will not be available when idling. The faster the alternator spins the more current it puts out. If you use an underdrive pulley on your engine then the alternator will put out less than its rated current. Now determine the current draw of your audio system under the conditions you will use it. The amplifier(s) manufacturer should provide this in the owner's manual or by request through telephone or email. If you crank it to the max then use the maximum current draw. Otherwise you'll probably want to use the "typical" or "with music" rating. If your alternator is rated at 80 amps then you probably have 24 amps available under ideal conditions. More when current drawing devices like lights and fans are off. This means your typical current draw needs to be less than 24 amps. Anything more than that are you'll be pulling the additional current from a storage device (battery and/or capacitor). Depending on the degree of additional current you need this can cause the dimming headlights syndrome. Small overages can often be helped with a capacitor while large overages need the upgraded alternator and battery.

If you want to install a power capacitor be sure to read the article on car audio capacitor installation.