That's clear enough isn't it? We all know what a sound is. It's a noise, something we sense with our ears. But what is sound? It's the vibration of the air by a moving body. In car audio that moving body is our speaker(s). The movement of the speaker forward and backward causes a vibration in the air that our ear receives and we hear music. Here's what sound looks like as a wave: 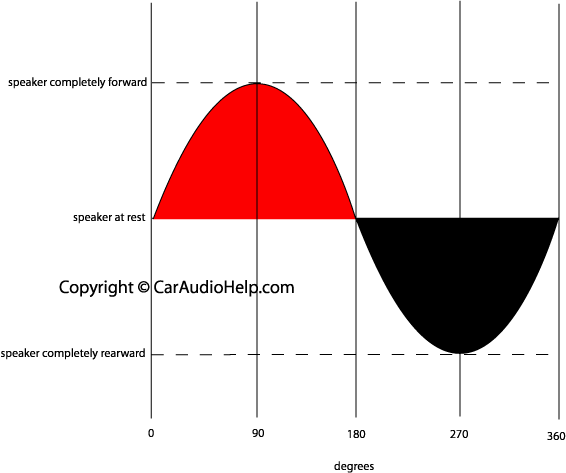 Sound Represented Visually as a Wave

Here's where it gets a little technical. A sound wave goes through a cycle of 360 degrees. As the speaker moves forward it goes from rest (0 degrees) through one quarter of its cycle to 90 degrees where the speaker reaches its maximum forward motion. As it starts to move back to rest it travels another 90 degrees to the 180 degree mark before moving completely rearward to 270 degrees where it reaches its maximum rearward motion. As it moves back to the rest position it travels the final 90 degrees to the 360 degree mark. The cycle then repeats itself and we hear the result as music. To summarize, as the speaker moves up and down it travels one cycle which equals 360 degrees. These cycles are measured in Hertz (Hz) with one Hertz being equal to one cycle in one second. Likewise 20 Hz is equal to 20 cycles in one second. The lower the number of Hz the lower the sound we hear. A human can hear, on average, the sounds between 20 Hz and 20,000 Hz (also known as 20 kHz). See the Flash illustration of speaker movement as it goes through the complete 360 degree cycle.

Speaker Movement Through a 360 Degree Cycle

We do not hear all of the sounds equally though. Our ears are less sensitive to sounds at the far ends of the scale (low and high frequencies. This was discovered through research done by Fletcher and Munson at Bell labs back in the 30's and they have given us the "Fletcher-Munson" curve which illustrates this point. See the figure below. 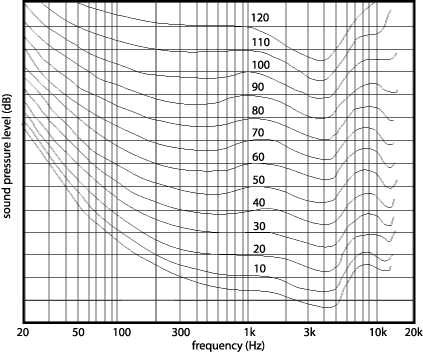 Notice how the curve goes up at both ends of the scale. Also notice how the curve is greater at lower volume levels (sound pressure levels). This is what the loudness circuit on a head unit tries to do (typically labeled LOUD). It increases the level of the low and high frequencies at lower volume levels. As the volume goes up the level of boost at these low and high frequencies is reduced. However, some loudness circuits do nothing more than boost the low and high frequencies by a constant amount. If you've seen a vehicle with an in-dash equalizer the chances are very good that the vertical sliders were arranged in a similar fashion to the Fletcher-Munson curve. This is sometimes called "making your EQ smile" because of the smiley face shape it has.

The audio spectrum, for our purposes, is divided into four separate frequency ranges. These ranges are called sub-bass or bass, mid-bass, mid-range and high. There are no set in stone numbers for these ranges but generally it's close to the following. I've also included a column that shows what size speakers would typically cover each of these ranges.

In order to keep the speakers operating within their specified range a crossover system needs to be used. There are two types of crossover systems, active and passive. We will discuss passive crossovers here. Active crossovers are covered in the page on signal processors. A crossover limits the signal to a speaker by attenuating or cutting the frequencies at certain crossover points. This attenuation is measured in decibels per octave (dB/oct) and the amount of attentuation is called the slope. Attenuation is achieved through the use of crossover elements, inductors and capacitors. These elements are selected based on the slope desired, impedance of the speaker and are arranged in accordance with the type of filter needed (high pass or low pass). The smallest slope is 6 dB/octave and is accomplished using a single inductor (for passing low frequencies) or single capacitor (for passing high frequencies) wired in series with the speaker. The next largest slope is 12 dB/octave (crossover slopes are in multiples of 6dB/octave) and is created by using a single inductor in series with a speaker and a single capacitor in parallel with the speaker (for passing low frequencies). The placement of the inductor and capacitor would be reversed for a 12 dB/octave high pass crossover. See the images below. 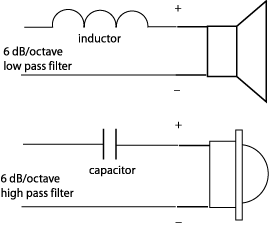 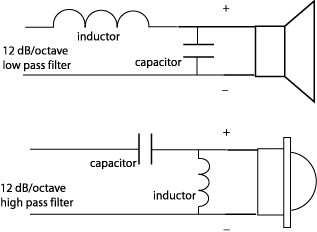 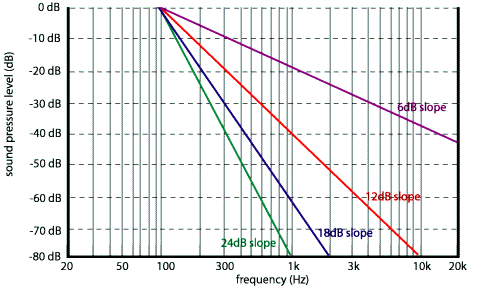 So which is better, a higher slope or a lower slope? Well they both have advantages and disadvantages. A low slope such as 6 dB/octave will allow more overlap between drivers which may provide a smoother transition at the crossover point, lessening any tonal change between the different drivers (i.e., midrange and tweeter). But this lower slope will not protect the drivers from damage as well as a higher slope can. Higher slopes will offer better driver protection but if the crossover system is not designed properly you will be able to hear a very distinct tonal change at frequencies near the crossover point. You don't really need to worry about these intricacies as they will be handled by the speaker designers. Just know that if you are crossing over a subwoofer that a higher slope (18 dB/octave or higher) is better to prevent bass localization (being able to tell where the subwoofer is placed in the vehicle). Passive crossovers do absorb some power, can cause phase problems and can be complicated to design. Active crossovers are better because they are usually adjustable, don't cause phase problems and don't have the same power robbing problems as passive designs.